There are a lot of misconceptions about bonded joints. One of the misconceptions that I’ve seen most often is that people think that the average shear stress in a lap joint is predictive of the strength. This same misconception is usually phrased as either:

In this post, I’m going to explain why these statements are incorrect. I’m going to try to give you a understanding of how load transfer works in an adhesive joint, and I’m going to share some Python code that produces a first approximation of the stress distribution.

For simplicity, we’re going to ignore the effects of peel. Peel is the tendency for the ends of a lap joint to separate. This can cause the joint to fail in some cases, but considering the effects of peel complicates the analysis of the joint — since the purpose of this post is to give a basic understanding of the mechanics of the joint, I’m going to ignore this complicating factor.

Obviously, the deformation of the joint is exaggerated, but it allows us to see what’s happening.

First, let’s look at the lower adherend. We see that the left edge of the adherend is built-in (i.e. it can’t move). When load is applied, the left portion of the lower adherend stretches a lot because it is carrying the entirety of the reaction load.

This “U” shaped shear stress distribution should be the first clue about why using the average shear stress in the joint to predict failure might not be the best idea.

A Linear Model of the Joint

The actual shear stress-shear strain relationship for most adhesives is non-linear, but we’ll start our analysis of a lap joint by making the assumption that the adhesive is linear-elastic.

Let’s start with defining the variables that we’ll need. The variables are shown in the following figure.

A force balance on the two adherends gives us:

We can find the deformation of the two adherends as follows:

The shear strain of the adhesive layer is given by:

We can differentiate this with respect to $x$ and then substitute in the previous equations to get:

We can then differentiate this again with respect to $x$ and substituting in the first equations, we get:

Remember that for now, we’re assuming that the adhesive is linear-elastic. Thus:

We can solve the second-order differential equation above, but we need two boundary conditions. The boundary conditions that we choose are the loads at the ends of the adherends. At the left end ($x=0$), the unit load on the lower adherend ($N_2$) must be equal to the applied load ($P$) divided by the width ($w$) and the load on the upper adherend ($N_1$) must be zero. The opposite is true at the other end ($x=L$). Thus:

We can plug these into the equation for $\frac{d\gamma}{dx}$ at the two ends of the joint and get the following boundary conditions that we will enforce for the solution.

Next, we’ll set the parameters for our solution. These include the elastic moduli, thicknesses, overlap length and load.

The function solve_bvp requires two arguments: (i) a function that returns the derivatives of the variables, and (ii) a function that returns the residuals for the boundary conditions. We’re going to reduce the second-order differential equation to a system of two first-order differential equations by defining $y$ as follows. Based on this definition, we can implement the two functions required by solve_bvp.

The variable res1 now contains the solution to our differential equation. We can plot the shear strain ($\gamma$) over the length of the joint as follows: 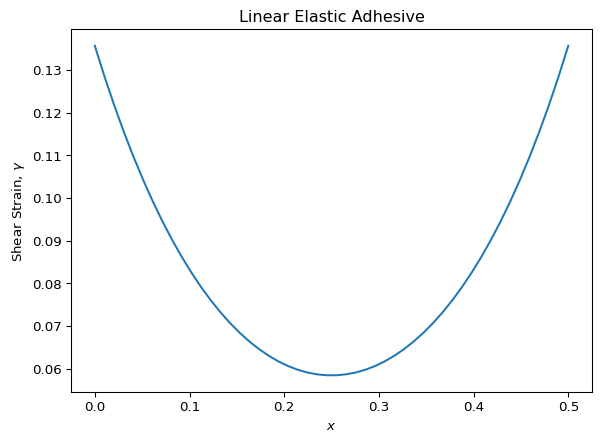 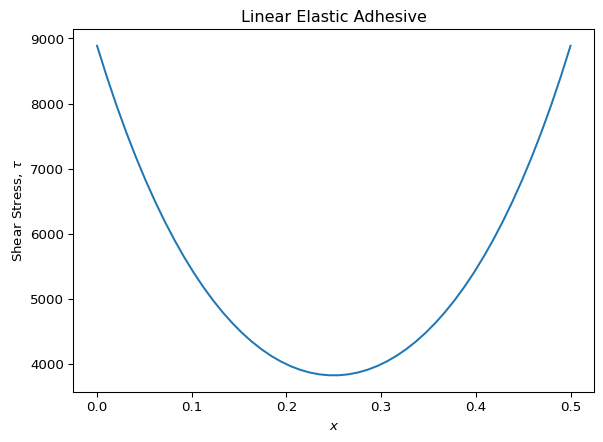 The ordinary approach to solving the stress distribution within a bonded joint involves finding the points along the length of the joint at which the adhesive transitions from elastic to plastic and then solving the elastic and plastic portions of the joint separately. If you try to naively solve the equations above with an elastic-perfectly plastic adhesive model, you’ll get errors since the Jacobian become singular. For the purpose of keeping this blog post simple, we’ll cheat a little bit and give the the stress-strain curve a very small slope above the yield stress. This will eliminate the numerical issues, and as as long as this slope is small enough, it won’t affect the results very much.

With this in mind, and considering that the strain could be positive or negative, we implement a function to find the stress based on the strain as follows:

A Nonlinear Model of the Joint

Now that we have a function to describe the way in which the adhesive creates shear stress depending on its shear strain, we can implement the solution to the differential equation again. Since the boundary conditions don’t depend on the behavior of the adhesive, we can re-use the same function for calculating the residuals of the boundary condition.

Here is the strain solution that we get: 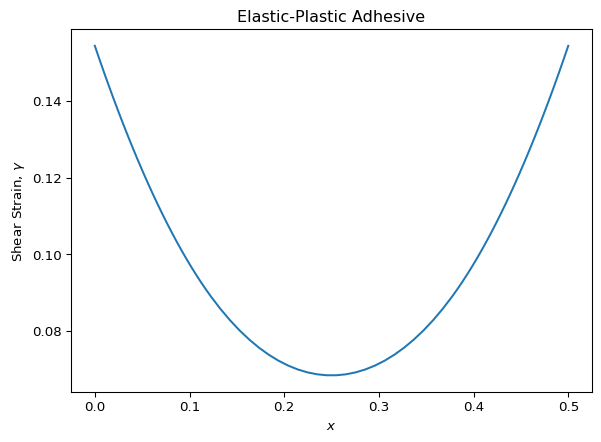 And the corresponding adhesive shear stress solution is as follows: 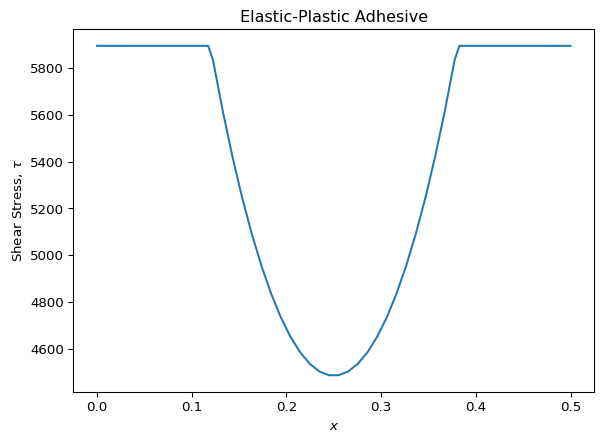 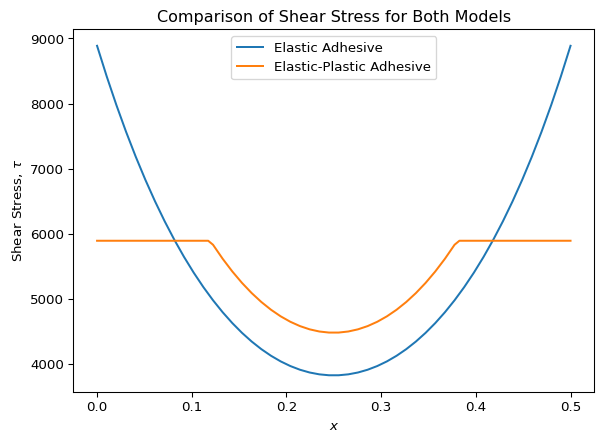 First, we’ll keep all of the parameters constant except that we’ll vary the load. This will show us how the stress distribution changes as we increase the load. The results aren’t surprising. At low loads, the joint is fully elastic. As the load is increased, the adhesive at the ends of the overlap start to yield. As load is increased further, the yielded area grows and the “trough” gets shallower. Finally, the joint becomes fully plastic. At this point, the joint would surely fail, but since our model doesn’t check for failure, we don’t see this. 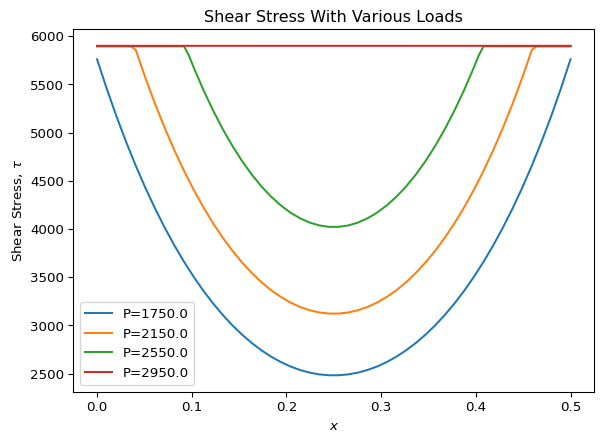 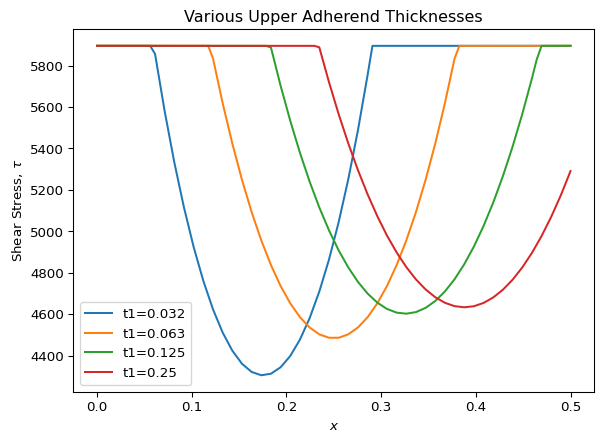 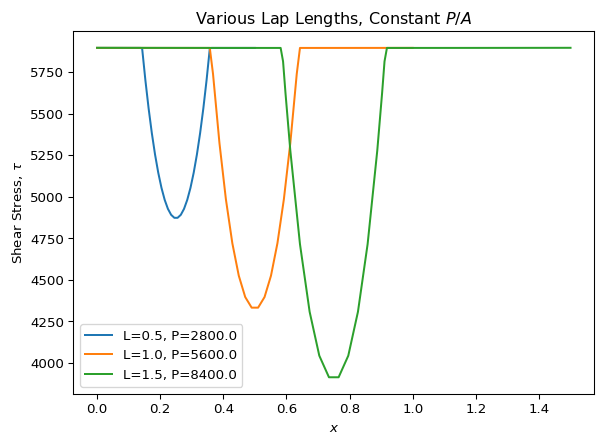 Here, we see that for all three overlap lengths considered, the adhesive at the ends of the lap is plastic and that there’s an elastic “trough” in the middle of each joint. At this point, we might be tempted to declare that all of the joints are able to carry at least the same average shear stress ($P/A$), but before we do so, let’s look at the shear strain in the adhesive layer for each of these cases. 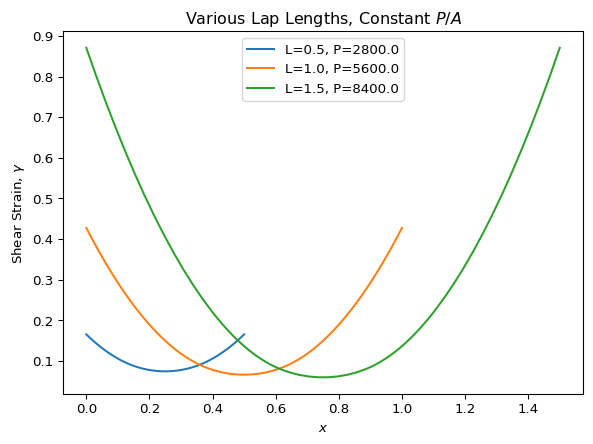 Here we see that the shear strain in the adhesive at the ends of the longest joint is almost 0.9. Think about what that means: the “top” of the adhesive layer has moved sideways relative to the “bottom” of the layer by an amount almost equal to the thickness of the layer. In other words, that a huge amount of strain.

The ultimate shear strain is going to depend on the type of adhesive we’re using, as well as the environmental conditions (temperature, moisture content, etc.). For a lot of adhesives, the ultimate strain is going to be somewhere in the range of $0.2$ to $0.6$. So, in the three examples shown here, the first overlap length ($L=0.5$) can probably carry this value of $P/A$, the second overlap length ($L=1.0$) might be able to carry it, but the third overlap length ($L=1.5$) almost certainly will fail. This is the reason that you can’t use the average shear stress ($P/A$) to size lap joints.

If you want to play around with this model, I’ve created a widget that implements this model.